I have been resting this week instead of tearing around socialising every day, and it's paid off; I haven't needed to take any painkillers today.  I only took a couple of aspirin last night because I used the carpet sweeper to clean the carpets which haven't been vaccummed for a month or so and I couldn't stand the mess any more.  My neck and back ached for a few hours but then the aspirin kicked in.  Anyway, enough of that.

I think I've mentioned this here last year some time, about my husband's cousin Yaso (his cousin's wife actually).  She works for the (Australian) government in Papua N-G, helping resettle the displaced people over there.   Thousands of them have been forced from their natural living areas by the big mining companies, and they are sent up to mountain tops where it is so much colder than what they are used to, and their babies are dying from the cold.  So I promised Yaso I would make cot quilts from my stash, that she could take with her to distribute among the native people.  She was quite tearful about my offer, and asked who would pay for the fabric.  I showed her my stash which  has been mostly given to me or found at opshops, and I assured her it won't cost me anything except time,  and I have plenty of that if I do less shopping, gallery gazing and craft classes for myself!

It only took me a couple of hours to whip up this little quilt using the fabrics in my stash.  Ken said it wouldn't keep him warm, but even though there is only a thin layer of wadding in the middle, it will be enough to wrap around a tiny bubs in its mother's arms.  I didn't use a pattern - just  joined colourful fabics up for the front, and used a brushed cotton for the backing.   And to make it faster, I didn't bind it - I used the 'envelope' style (I think that is what it's called, when you sew the layers inside out around three sides then turn them right side out, and sew up the top. 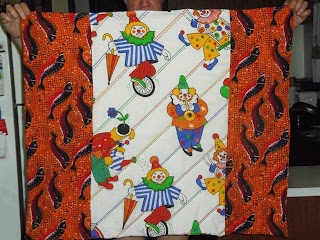 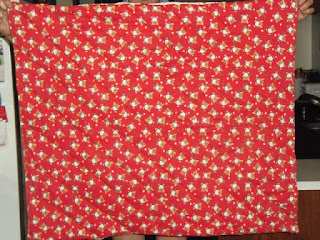 You are such a good person Gina. Would you like me to make a few little blanket quilts too - I'd love to help.

Thank you so much Melody - I know you have more than enough to cope with in your own life, so your offer has very special meaning to me.

For some reason, I haven't been getting updates of your blog. I'll be spending a little time catching up! Glad you've been able to get something finished and I'm sure it will be appreciated

Hi Gina,
I was reading Melodys blog this morning and she wrote a piece on the plight of these people. I would love to put my hand up to help.

I also popped over from Melody's blog.. would you email me more info, like where to send them, and any other helpful info.. would love to help out.
rnkelli@aol.com

I also popped over to Melody's blog and read about the plight of these women and their babies. Would love to help out... need size of quilts and where to send them. Thank you so much Melody and Gina

I have some quilts I could send off straight away if you'd like to give me the postal address.

I too popped over from Melody (via somewhere else) - you probably had the dimensions there but I can probably make a few... if you let me know where to send them...great effort by all.

I'd love to help. I actually live in PNG (in the part where it is really hot. Can you give me an address to post things to?