I have long wanted to have a blog or website of some kind with photos of my patchwork and stitching.  No comments or anything else, just a gallery.  Kathleen at Yesteryear Embroideries  recently started a gallery blog of her own work and when I emailed her she explained how she set it up on Blogger.  So I have started one for my work, but it isn't quite what I want yet, as I want to put captions on each photo and haven't been able to figure out how to do that yet.  I thought I had, but when I'd finished typing, I refreshed the page and it still appeared with no text..grrr.
Anyway if you want to have a look, here is the link.
http://patracatstitchingallery.blogspot.com.au/
There is nothing there that you haven't seen before on this blog, but it is condensed down to simple pictures.
Posted by Gina E. 5 comments:

On Thursday it was so hot, it was impossible to get anything done outside apart from hanging a load of washing on the line (sheets) which were dry in about an hour!  So I decided it was the perfect day to sit inside in airconditioned comfort, and got all my supplies together to start my basic stitching sampler.   Funny to think that I did a very similar project at the Embroiderers Guild just a few years ago, and have the sample pieces in a neat folder, but barely look at them... 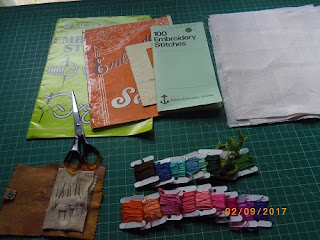 I have a number of hardback books on embroidery stitches, but I love these vintage leaflets put out by Semco, Anchor and Clarks so long ago, and decided to make use of them. Scissors, needles, and floss, and I cut five pieces of fabric into 10" squares - one Aida and the rest evenweave.  Then I marked a border and lines half an inch apart with removable blue pencil.  However after I had done four rows of stitching on the evenweave, it just wasn't working, so I pulled it out, and re did it on calico, which was much more suitable to those particular stitches.  I will use the evenweave for the stitches that suit that counted thread type fabric. 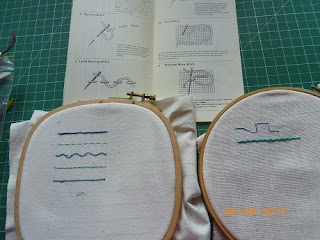 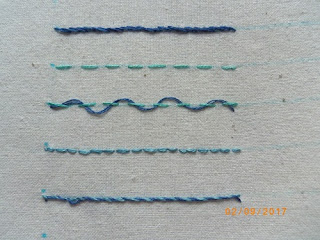 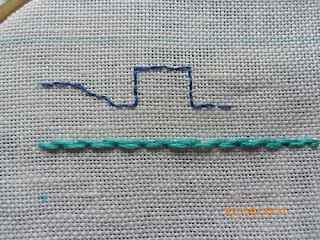 On the evenweave, I did Back stitch with twists, which was easier to do on that as I could count the threads to make the stitches even.  I've never done that with back stitch before, so I learnt something from this.
The second stitch is cable stitch, one that I have never done before, and found that it was better done in six strands of floss instead of two because the cable effect was more visible.  And again, much easier on the even weave.

So there we are.  Surprised?  I am!  Given that I am allowing myself to do one row of a new stitch per week, I have completed the first six weeks of this year :-)
Posted by Gina E. 5 comments:

I don't usually make new year resolutions, strive to achieve goals, or set challenges for myself.   I just go with the flow most of the time, because I know that life can get in the way, or sometimes I just lose my mojo for a while.   Ä few years ago I did set myself a goal - to work exclusively on my UFOs all year, and I was very pleased with myself at the end of that year to have finished most of the UFOs that I had lying around.  The exercise proved to me that I was capable of finishing projects if I set my mind to it, and since then, I have strived to keep working on my projects until they are finished, without getting sidetracked on other things.  There are still a few large cross stitch projects unfinished, but I will do them in time.  And a few patchwork projects that are barely started, but again, long term items that I am happy to pick up now and then and play with.

One of my long time favourite bloggers, Lyn at The Little Red Hen - wrote a post on her blog in January, saying that she and her daughter are going to try to learn a new stitch every day, from one of Lyn's embroidery books.  I thought this was an admirable challenge, but knew that I would fall short of stitching something 365 days in a row!  But as Lyn says, when you do a lot of embroidery, you tend to fall back on the same old half a dozen stitches because you know them so well.  When I was actively involved with the Embroiderers Guild (attending classes) I learnt an enormous amount of different ways to use stitches, but as I've done more patchwork in recent years, my stitching skills have fallen by the wayside.

So I have been thinking about Lyn's challenge, and how I can suit it to myself.  Instead of a stitch a day, which I know I would NOT be able to keep up with! I am going to attempt one stitch per week.  I looked through all my books and booklets on stitching tutorials, and decided to use one that has 50 stitches in it, which I think is more than enough for the average stitcher.  I will do one a week, and by the end of the year, I should have worked my way through that book and have something to show for it! I have found some even weave fabric in my stash, got out floss, needles, and scissors, and have put them all in a needlework roll so I don't have to go looking for anything when I want to work on my stitches.  So I have six weeks to catch up on, and hope to have them done tomorrow, as realistically a line of basic stitching doesn't take that long...we'll see!  I will post photos of my progress here.