What I am doing.

The Xmas table runner I have been working on at the Quilt Shop is all but finished, just one side left to hand sew the binding, and it will be posted off to Queensland on Monday.  I will take a photo of it to post here later.
One of our friends is the proud grandmother of a little boy, and she loves to show us photos of him on her Iphone.  I asked her to email me her favourite photo of him, so I could make a mug rug with his picture on it.  Now S. is not a craft person at all, and she didn't really understand what I was planning. So when I presented her with this last week, she was blown away! 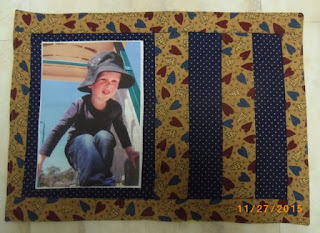 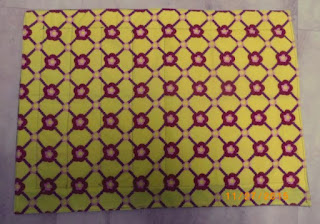 It is a bit bigger than a mug rug, but smaller than a placemat, so I told S it is a snack mat!  Of course she can use it any way she wants to;  some people have said they would frame it and hang it up somewhere, but I wouldn't go that far.

The quilters and stitchers in this area of Melbourne are so happy that Sharon and Alison have opened this shop!  I have been to all of the Friday morning 'Coffee O'clock" sessions, and plan to continue doing this as long as it is running.  Some of the group are regulars and others pop in when they can.  There is also a Monday sit and sew group and some ladies go to both.  I don't have that much time to spare unfortunately!  But I am very happy to spend two hours a week dedicated to working on my own projects and seeing what the others are doing.  Sharon and Alison cook a cake on the premises for our group every week, we are thoroughly spoiled!  I took some photos last Friday to post here so my readers can see why I have been raving about The Quilt Shop.  Of course there are other patchwork and quilt shops around Melbourne, but I haven't seen one yet that has so much space and offers so many amenities to their customers!  I posted a photo of the shop front a while ago, but this one is a better shot.  The next photo shows where it is, near the corner of Bridge and Susan Streets, Eltham. 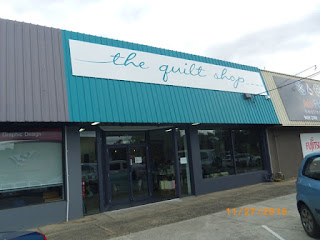 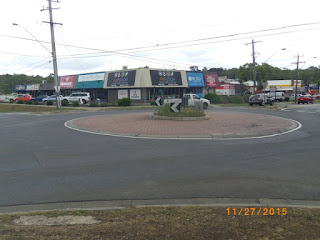 When you walk in the front door, this is what you find: 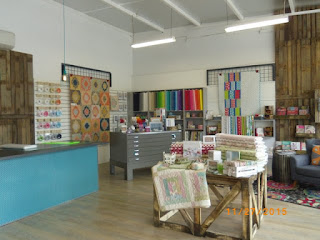 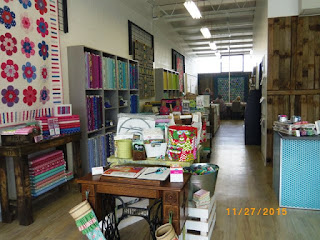 Straight ahead is where most of the fabrics are arranged in colour categories, with more tables laden with various products.  At the end of this corridor is the studio or craft space. 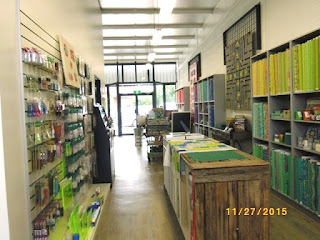 Standing in the studio looking back up toward the entrance.  The wall on the left holds all the accessories needed for the quilter, nothing is left out! 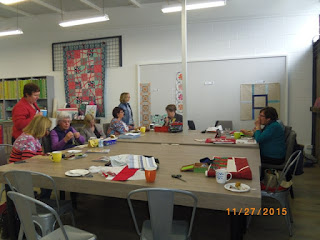 Here is our lovely workroom.  The tables have powerpoints on the sides for those who need power for sewing machines.  The white wall you can see has special covering to enable people to 'stick' their work up to see how it looks.  There is a name for this, I can't remember at the moment.
On the left out of the picture is a kitchen where tea and coffee is readily available. 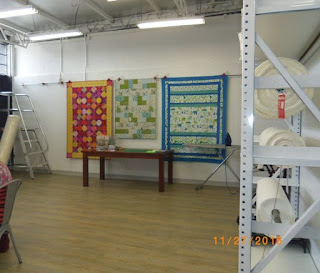 On this side of the room is an ironing board and iron set up for whoever needs it, a table with a large cutting mat and ruler, and a rail to hang quilts which are examples for future classes.
Ahhhh!!  I'm in sewing heaven here...thank you so much Sharon and Alison!

Thanks for the compliments on my Scotty dog quilt!  For anybody who wants to pin something from my blog to their Pinterest account, please go ahead - I don't mind at all!
I've been busy this week working on some projects to be done before Christmas.  The first one is for a swap on a forum, and my partner said she would love a table runner to put on her coffee table.  She said they would be putting a Nativity scene set on top of it, so I have left the centre panel plain (no embellishment) as it won't be seen under the ornaments.  But she can still embroider or otherwise tart it up later if she wants to.
I just have to put the binding on now, which is a creamy colour similar to the centre panel. 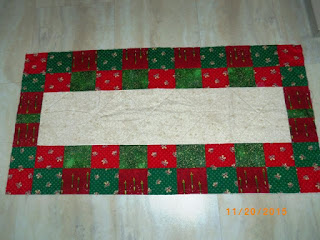 The second item is a very simple placemat.  I took the photo of those Gouldian Finches and printed it on fabric to use in the quilt that I made for the Avicultural Society raffle, but Ken and I decided it wasn't good enough, so I threw it aside at the time.  When I found it under some other stuff last week I thought I may as well just make a mat out of it, and donate it to the Avic. Society Xmas hamper.  I was finishing the binding today at the Quilt Shop sit and sew morning, and the ladies all said they liked the backing fabric best! 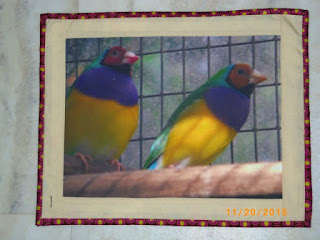 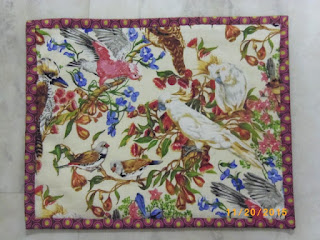 The third item I am doing is one of those spur of the moment things.  I found a photo on Pinterest some time ago, of a quilt with a cat appliqued on it, and the fabric was ripped in places to make it looked as the the cat had clawed it.  It was called Cat Clawed Quilt, and posted on Pinterest several years ago.  I tried in vain to locate the original person who posted it, so I could ask if she had used a pattern, but I couldn't track her down, or find a pattern.  But somebody else had posted a template on Pinterest of a similar cat and claw marks on fabric, so I printed a copy of that.
Last night I pulled out some pink and white fabrics that I've had for ages and never used, as they aren't cotton - just materials I've been given, or picked up somewhere...I wanted to use something that I could rip into, lol!  Cut them into strips, sewed them together quickly, traced the cat template on to fusible webbing, and ironed it on to black cotton.  Cut that out, ironed it onto the pink and white back, and used a black fabric marking pen to draw the claws, whiskers and claw marks.
Today I started to stitch over the pen in black embroidery cotton, and have decided not to tear rips in the fabric for realism!  The Quilt Shop had a roll of cute fabric, white with black paw marks, so I bought some of that and will use it for the backing.  Ken said "What are you going to do with that?" and I said I didn't know, just leave it around for a while until I get sick of seeing it! 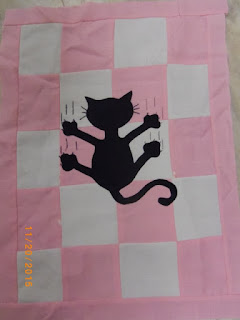 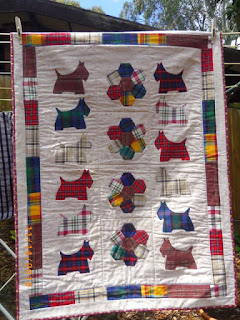 Here is my little Scotty dogs quilt, neatly bound with mitred corners - thanks to the girls at the Quilt Shop!
My next project is a table runner with a Christmas theme.  I've completed the top, and the backing and wadding is sitting on my table waiting to be cut out and put together.  I'll do the binding at the Quilt Shop this Friday.  This is for a swap on the Down To Earth Forum, and my partner has already sent me her gift - a row of Christmas fabric bunting, and three clever cable ties.  Here are the photos: 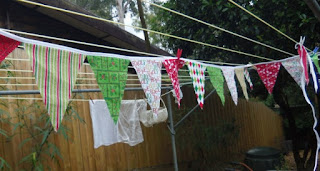 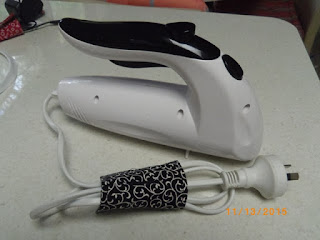 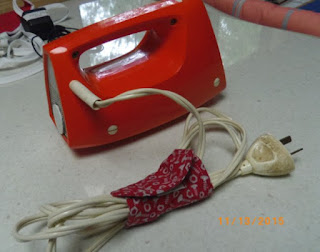 I found this quote on Pinterest this week and thought it was worth reproducing here, with thanks to whoever posted it on Pinterest! 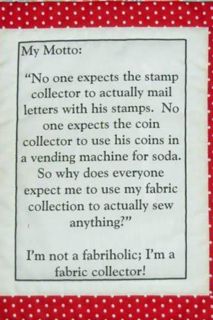 Second Friday at The Quilt Shop.

I was back at the Quilt Shop this morning, and it was very busy in there!  I didn't count the ladies at the sit and sew tables, but there were more than last week.  I took my scotty dog mini quilt to ask for advice about doing a mitred corner binding on it.  I've only done one before, on a small mat, so I'm not confident about doing that, but after the mess I made of the binding on the placemats I've just finished, I thought it was about time I learned how to do proper binding!   Just as well the placemats are for a bloke, and he couldn't care less about the binding, all he wanted was something with birds, and he's got them. 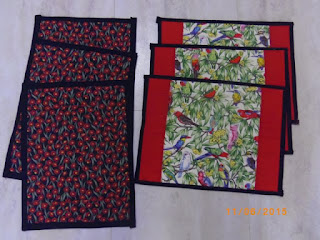 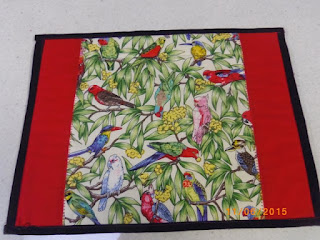 I was pointed in the direction of one of the ladies, who I was told was an expert on binding, and when I approached her she was surprised to hear that!  But she was very helpful - sat with me and explained how to do it right from the start, and pinned it into place for me so all I have to do is machine it this week and take it back next Friday when she will show me how to do the end bit.  I have been shown this before, and seen it in magazines and on You Tube, but there is nothing quite as good as being shown on the spot.
So hopefully this time next week I will have my Scotty Dog quilt finished and photographed to post here :-)
Posted by Gina E. 2 comments: