I'm really hooked on these miniatures! I finished off my Teacup postcard tonight, and have already made up two more little blocks. I also finished two ATCs for a Yahoo Group swap that I am in. The first two photos are of an ATC and a postcard that I received in today's mail. The pink ATC is from Susan M. in the U.K. and the green postcard is from Laura in the U.S.A. Thank you both, ladies! 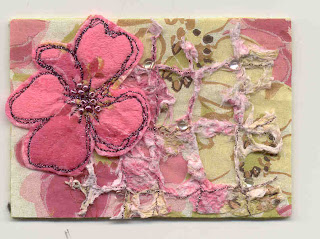 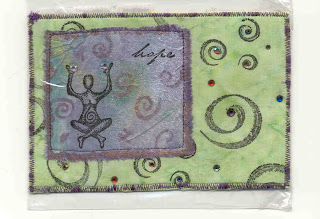 Here is my Teacup postcard, finished at last. 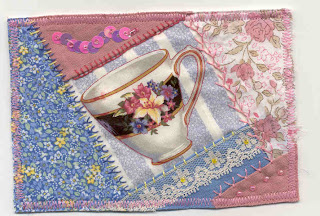 And here is the block for a teapot FPC. I hand stitched the background fabrics onto the backing fabric, then used Pellon to iron a sticky backing onto the teapot, before I cut it out and ironed it on to the block. 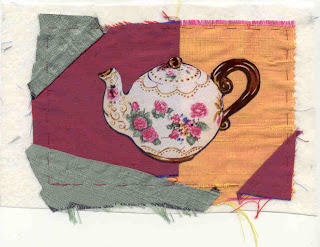 The theme for the April Yahoo swap is Colours Of The Rainbow, or Spring Flowers. I decided to make a kind of rainbow effect with colours, using various colours of laces, 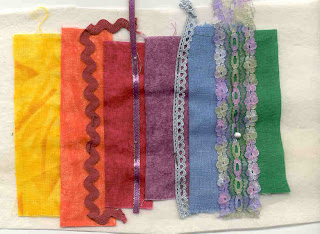 And finally, here are the last two Yahoo ATCs: 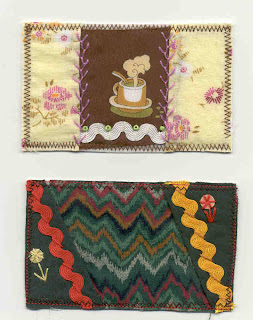 I've sworn off eBay since I reduced my working hours in order to care for my mother-in-law who came to live with us in January. Four hours a week in my original job as a Carer doesn't allow me to spend up big on vintage linen like I did a few years ago, and even though I receive an allowance from the Government for being an at-home Carer as well, it isn't enough to make a difference to my spending. So I satisfy myself with an occasional op-shop jaunt, and sometimes I strike gold! Here is what I found today:
This framed piece of embroidery is so beautifully stitched I just had to have it for $3! I would have paid more if the shop had a higher price on it, as it is just an unusual design. I rarely see embroidered fish - cross stitch designs, yes, and seahorses, but nothing like this. And doesn't the frame match perfectly? 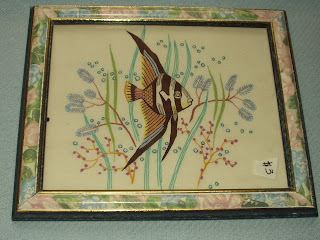 The cashier at Vinnies remarked on this, saying what a nice cushion cover it would make for $5. I replied that it was not going to be a cushion cover in my home! I washed it in woolwash after I'd taken this photo, and it looks even better now. A stunning sample of tapestry/needlepoint stitches in a variety of wools and cottons. 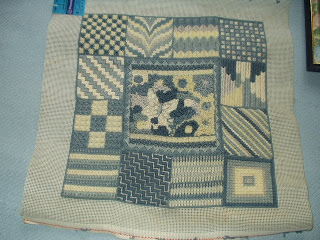 Finally, this lone hankie for $1. It is Lagartera work in the corner, isn't it? 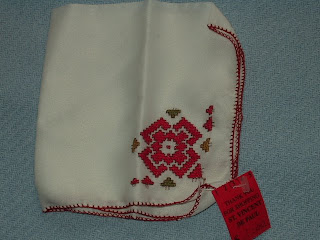 Block for my next fabric postcard. 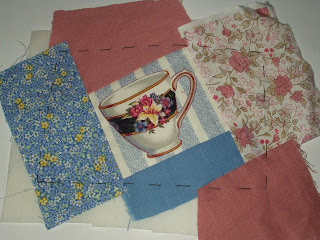 The Yahoo group for swapping fabric postcards is keeping me on my toes, but I love it! The more I do, the faster I become at setting the blocks up. Here is the next one which was supposed to be sent out this week, but my exchange partner knows I have been delayed. I did this last night and this morning, and hope to embellish it and get it in the mail next week.
Posted by Gina E. 2 comments:

One finished, another started.

I did say that I had to get this one done soon! I did the seams and beading late last night, and finished it off today. Hubby-who-knows-nothing-about-stitching inspected this tonight and said "That blue butterfly would look better in the opposite corner on the dark red material. It looks empty over there". Well, halloooo smarty pants! Don't you ever run out of ideas and time?? 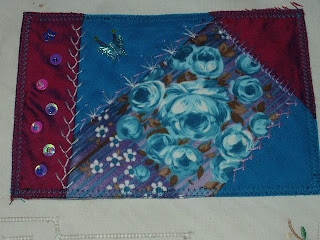 I have organised a Round Robin on our Cross Stitchin Fingers Group on the Stitchin Fingers website. There are six of us, and instead of dividing a piece of square fabric into 3 up and 3 down sections, I decided to have the six sections all in a row, and turn the finished RR into a table runner. I've chosen teapots and cups for my theme, and the design I've started stitching is a Delft Teapot. I know you can't see much here, but this is really just to show the other members of our RR group what I am doing. 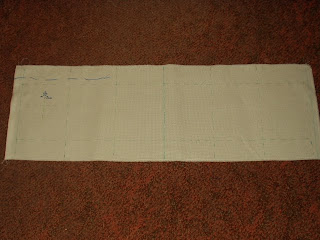 Mini patchwork for my Japanese friend.

This is the finished product of the crazy patchwork piece I made for my Japanese friend, who is 90 years old. I do not do as much embellishment on my patchwork as most of the more experienced CQ stitchers. I haven't got the time or the talent, for a start! But I also feel that any more embellishment on a small piece like this would have been overdoing it. When I presented it to my friend last week, she didn't realise I was giving it to her until she saw what I had written on the back. She was quite overcome, near to tears. It is always a pleasure to make a gift for someone who show such depths of appreciation.
Posted by Gina E. 3 comments: 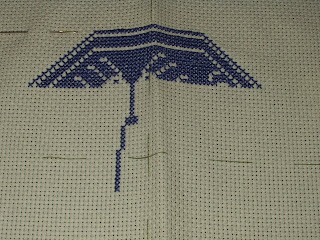 You'd never think this is a Lyrebird, would you? Well, it will be, when it's finished. Assisi work for a friend's 60th birthday. 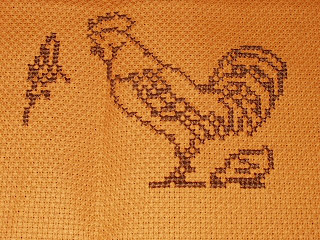 This is a rooster and one chick. The unfinished bit on the left will be the hen and another chick. I started this because it is something easy that I can pick up when I want to work on something without concentrating too much. 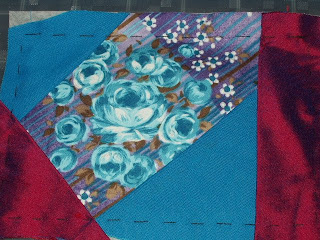 This is the block for a postcard which replaces one that was lost in the mail. I need to finish this very soon!! 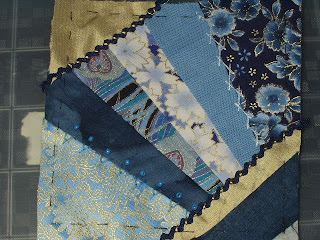 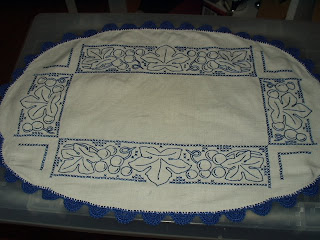 Lincraft Greensborough is closing down.

Lincraft is a chain of stores that specialise in fabrics of all kinds - dressmaking, quilting, embroidery fabrics, wools, cottons, and so on. I was very disappointed to discover that our local Lincraft shop in Greensborough has lost the lease to their premises, and will be moving out later this year. Spotlight in Box Hill is the nearest crafts supply store to me now...or is there one in Doncaster? Lincraft was having a closing down sale last week, so I took advantage of this and bought some interfacing, some cute buttons, and a skein of DMC cotton that was lying in the button box. All in all, about $10.
Posted by Gina E. 3 comments: