The storage of fiddly bits first:
Lyn over at Moore Patchwork was bemoaning the state of her ric rac collection - all tangled up in a box.  I suggested she sort it out and wind each length around pieces of cardboard, and she was most grateful.  Here is what mine looks like now.  I keep them in one of those plastic containers that you store frozen pastry sheet in - I bought mine at Coles a few years ago.

The lace is another story.  There is far too much of that to put in the same container, although I do wind the lengths around cardboard sheets.  But they are all in a plastic pack thing that I bought in a mail order catalogue. They are meant for storing clothes, but of course you can use them for anything you like, and I have many of them, filled with fabrics, magazines and other stuff.  Too much STUFF, that's my problem..

Now - the bunting.  I've never really been into bunting, but I've noticed that a lot of craft magazines and website are talking about it lately.  When I saw a tutorial on here yesterday, I thought it looked like a fun thing to do before I start my next 'serious' project.  Actually, finishing a project is more like it - I still have to embellish my April CQ block for CQJP2012.   But I needed something sort of mindless before I tackled that, so here is my very first attempt at Bunting!
The tutorial specifed bias binding 25mm wide, and the blue was all I had in that width.  The fabrics I used are batiks left over from the quilt tops I've been making.
Posted by Gina E. 4 comments:

Today I finished a single bed quilt cover for Oz Comfort Quilts, and will be posting it to Jan Mac early next week (after I've shown MIL - she loves to see my work). I rather like this one, and I can understand why so many quilters are reluctant to part with their finished projects. But I've got nowhere to keep excess quilts, and I'd rather them to go someone who has a genuine need for a warm rug or quilt in our coming winter months.

I also made up my block for the April CQJP - my theme this month is Autumn. It was hard to select just a few ties from my stash, as there were so many with those Autumn colours.
I had a small furry friend keeping me company under the desk while I was working. He probably tucked himself under there to get out of the way of my feet while I was feeling around for the sewing machine pedal! 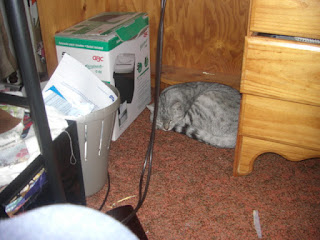 Today I cruised the opshops in High Street Kew with a friend, and was rewarded with these lovely cloths - art deco style supper cloth with four matching napkins - $7. 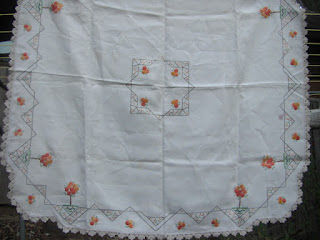 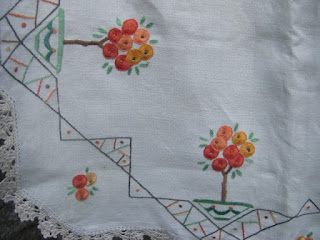 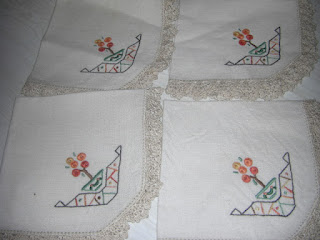 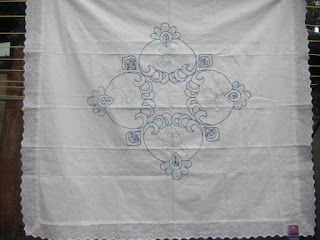 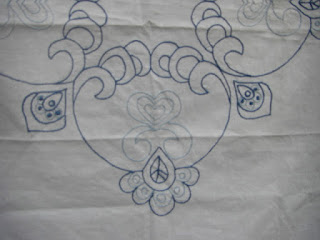 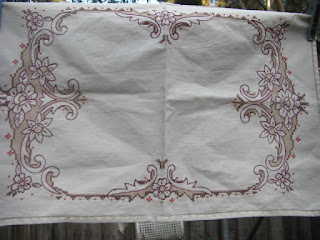 I think I've done enough tea cosies for the Bundoora Tea Cosy Festival next month. In addition to the three patchwork cosies that I have already posted photos of here, I finished these off over the last day or so. I received such good feedback from people over the first Tartan cosy that I decided to make two more. It will be interesting to see if anyone buys them on the day. I had already posted a pic of the herbs fabric cosy, but I added a row of ric rac and some buttons to tizzy it up a bit. The yellow ric rac doesn't show up very well I know, but all the green ric racs I had were the wrong shade of green for this fabric.


Posted by Gina E. No comments:

New additions to my collection.

I found these doilies at various opshops last week, mostly about $1 each. 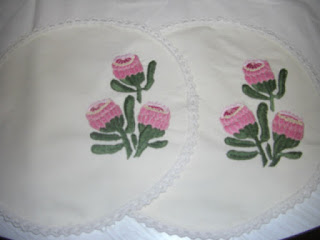 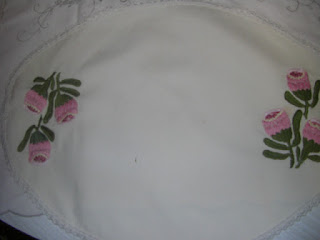 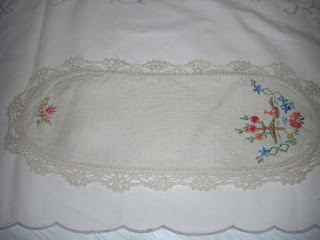 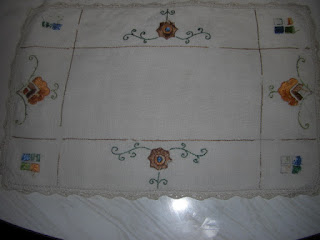 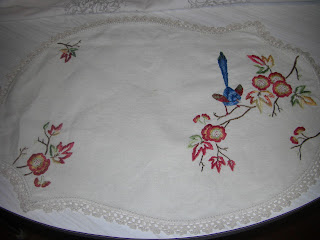 Quilt top in the making.

I've been making the blocks for this quilt top for the past week or so, and today I started pinning them together. With a bit of luck I'll have it finished early next week and will be able to send it off to Jan at Oz Comfort Quilts. 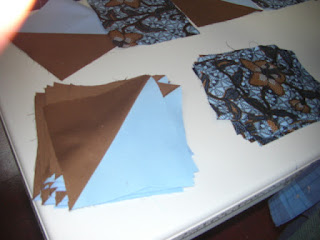 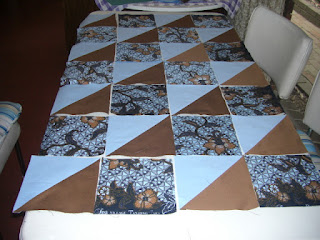 The camera doesn't capture the colour very well; yes it is blue and brown, but the batik fabric is brighter than it looks here. The brown solids are all from the same piece of fabric, so they are all one shade of brown, not different as in the photo.

New table cloth for the collection.

I found this beautiful cloth at the Salvos in Malvern today, for $15. It's been a while since I bought any linen, so I indulged myself. Hand embroidered of course, with a machine made crochet edge. 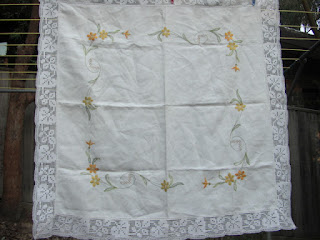 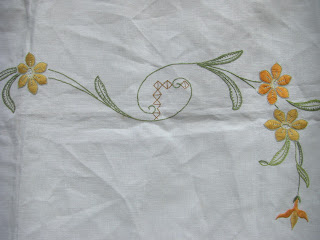 This was in the same opshop last week for $5, hung up with the skirts - probably because it is supposed to be a batik sarong. But I loved the fabric, and plan to use it for something else...I've accumulated a fair bit of batik, but other than cutting it up for quilt tops, there must be something else I can made (other than clothes). Anybody got some ideas? 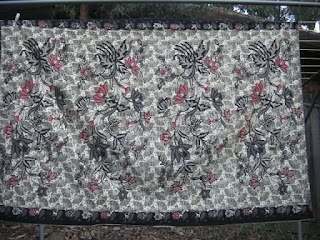 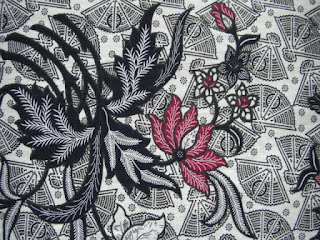 Posted by Gina E. No comments:

Remember that pile of inchies I made a few weeks ago? Another idea in the Inchie book was to make tiny little boxes. I like tiny things, so this project was right down my alley. 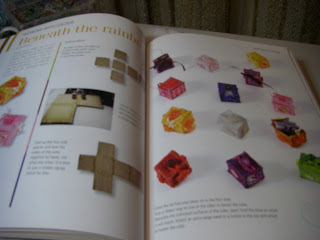 This is the box before I added anything. 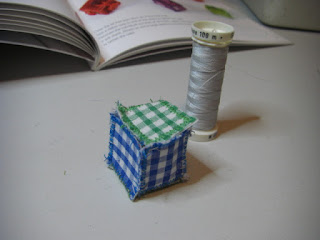 I have added a ribbon loop and a green button, and although you can't see it in the pic, there is a little Easter egg in there. I'm going to make another box and egg, and give them to our niece's daughters on Sunday. At 8 and 5 years old, they also love tiny things! 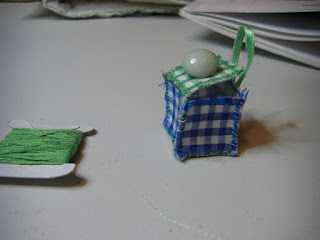 Posted by Gina E. No comments:

I finished making two more tea cosies last night. I've been attaching little tea pot buttons to the previous cosies, but haven't got any more left, and I feel that the tartan cosy needs something else. Do you think the Scotch thistle adds something to it, or should I leave it off?
The other cosy looks okay as it is because the pattern is very 'busy'. What do you think about that? 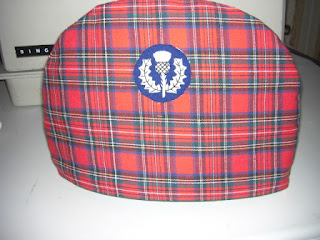 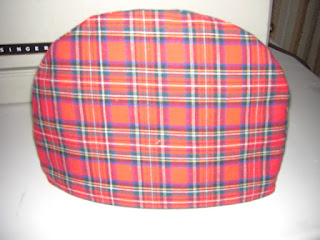 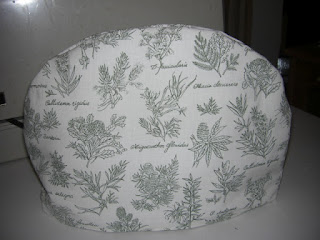 Today, Yarra Ranges Regional Museum opened a new exhibition titled "Practice Makes Perfect".  I was invited to the opening because I had lent some of my vintage linens to be shown, and I asked Sharon to join me, as she is one of the few people that I knew would truly appreciate the show.  It is a display of Australian samplers dating from 1850 to the present, some of them never seen in public before.  I took numerous photos, and have posted some of them on my Needlecraft shows blog here

The exhibition is on from 31st March to Sunday 24th June and the museum is free.  It is open six days a week (closed Mondays).  The link to their website above will give you more information.  If you have any interest at all in embroidery, this is a must-see exhibition, as the vintage samplers are fascinating, and the work of embroiderers today is absolutely stunning.
Posted by Gina E. No comments: