It has been a busy six months for me, with health issues dominating both our lives.  Ken was very ill late last year, but with new medications and exercise program,  he has improved enough to carry on a fairly normal but quiet life.  I have had problems with osteo arthritis in my knees, but am coping with that with the help of osteopaths and physiotherapists, and am determined not to go down the track of operations on my knees!
My Christmas raffle quilt for the aged care facility was greatly appreciated, and the raffle was won by one of their residents, which is nice because it will stay in the facility.  I haven't started any more quilts for them this year because I have been focussing on the memory quilt for my friend's mother's 90th birthday.  I got it finished a week before her birthday on 31st January, and both mother and daughter were delighted with it!   I would rather not do 'commissions' because of the time frame limitations, and the worry that the recipient might not like the finished product.  But there was no problems with this one. 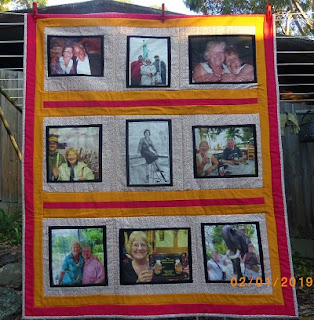 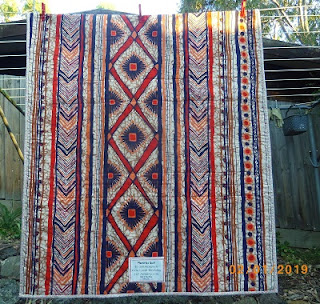 The Home Makers Forum have a craft challenge this year which is proving enormously successful.  One of our members came up with the idea of each person listing 12 of their UFOs and numbering them.  She would then provide a number on the first day of every  month, and we would have to work on that numbered project on our list.  It is a great incentive.  My January challenge was a calligraphy project, so it isn't appropriate for this blog, but my February project is a cross stitch item which I started a few years ago but put aside while I concentrated on quilting!  I was very happy to dig it out and work on it this month.  Not finished yet, but should be by the end of February :-)

I've also been doing some recycling.  Ken buys bird seed and chicken feed in 20 kg bags, which are called feedsacks, and made from some kind of toughened plastic.  I have seen tutorials on the Net where people made tote bags from these  feedsacks, so I thought I may as well use ours for that purpose instead of throwing them away to end up in landfill.  As fast as I make them, somebody wants one, and I've been given a dozen feedsacks by another bird keeper friend, so that is keeping me busy too! 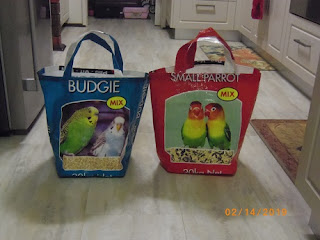