I should be continuing to finish some of my UFOs, but you know how it is...you see a pattern in a magazine or book and you just HAVE to do it NOW!
So why am I making hexagon flowers out of tartan fabrics? 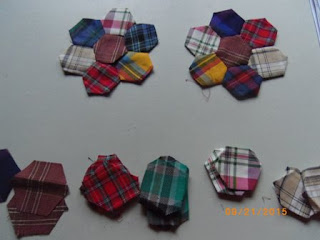 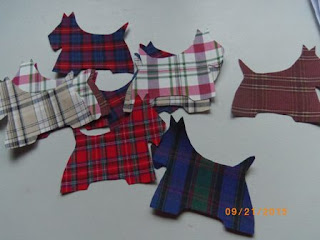 Which will all make up a small version of this quilt found in one of last year's issues of Homespun :-) 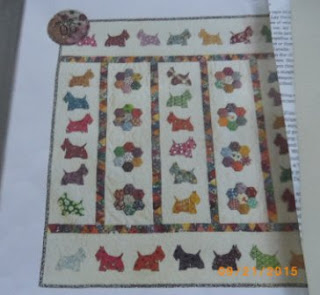 They used reproduction fabrics but Scotty dogs always mean tartan to me, and I have heaps of tartan fabrics! 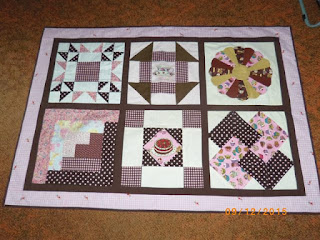 I finally made up those orphan blocks from my first patchwork quilting classes!  Funny thing at the time I was doing these, I only wanted to learn how to make these designs, which I could  never figure out by myself looking at books.  There were more blocks and the tutor went on to show us how to make them into a quilt, right up to the finished quilt stage.  But I was only using scraps from my stash and they didn't all really match up, my other blocks were pretty badly made, and I wasn't interested in making a quilt then as I didn't have the machine to do it properly and it all seemed too hard.  So these block were put away until I was decluttering this year and I decided they were too nice to hide away any more.  So, here they are made up into a table topper or throw, which might or might not be displayed in my house at some time in the future.

Here are some other orphan blocks I had tucked away, and I have sewn borders around three of them.  I might make them into cushions, or just mats to have under things.   The three red toned blocks were experimental "wonky" patchwork, and I am still wondering what to do with them. I plan to add a wide border to them and see if they would be okay for making up three cushions.  Any suggestions? 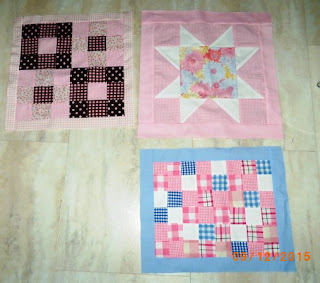 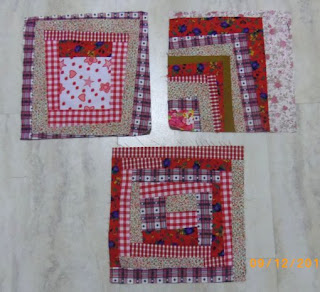 Told you it would be a late night!  It is 1 am as I type this, and I finished this apron about an hour ago.  It was so easy.  I took an apron from the kitchen, laid it over the denim fabric that I had in my stash, cut out the shape, hemmed the edges and added the straps - voila! 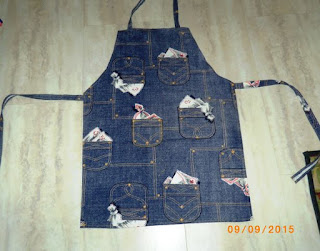 Bird quilt has a new home.

I just posted this on the Down To Earth forum, but most of my blog readers wouldn't see it there, so I am posting it here as well:
The quilt got a very favorable reaction at the dinner on Saturday night.  The committee had obviously been discussing the raffle and instead of selling tickets for $1, they stapled tickets on to sheets of paper and sold each sheet for $10, so in effect people were paying $10 for multiple chances to win.  They sold nearly $1200 worth of tickets!  There were 70 people there and many bought more than one sheet (Ken bought three, he wanted to get the quilt back home, lol!).  A lady who looked to be in her sixties won the quilt. She was so happy, every time I looked over at her table, she was stroking it or showing it to someone!  She told me her sister does a lot of quilting, so I said I hoped her sister wouldn't look too closely at mine as I'm no expert, and she laughed and said she wasn't worried about that! 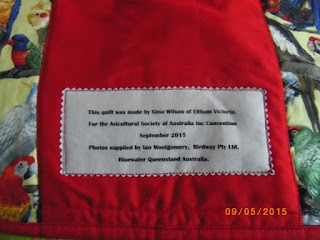 I've been asked to make another one for the Xmas raffle, and one of the committee members wants me to make six placemats using some of my bird fabric, for his Xmas dinner table!  I will run out of fabric at this rate!  He has offered to pay me for the placemats, which is good. If I do another quilt for the Xmas raffle, it won't be a big one like the first; I'll just make a table topper or lap quilt.

Ken also wants me to do another photo quilt, but not of birds.  He has a good friend who is into vintage motor bikes, and Ken wants me to do a quilt featuring photos of vintage bikes for him.  I told him that I wasn't going to do any more full size bed quilts as they take too much time and effort, and he said a small one would be fine.  Then I had a thought for another one for us; using photographs of our cats and dogs over the years, make a Pets memory quilt/wall hanging!

And that's not all....we were in a cafe in Eltham yesterday and I was admiring the aprons that the girls were wearing.  They were all the same, made out of denim, and looked really cute.  I asked if they were custom made, and the girl I asked didn't know, but assumed they were.  I did a little sketch on a paper napkin and told the girls I was going to make one for myself, and they want to see it when I do!  So I've got the fabric out on my sewing table now, and was planning to do it today, but time got away as usual and I haven't done anything with it yet.  Looks like another late night session coming up.  Sigh....it's the only way I get anything done for myself around here!
Posted by Gina E. 1 comment: